We arrived in Rome at about 9:30 am. The passport check was easy, the Italians are much more civilized about security screenings and not nearly as annoying as TSA. I converted $100 to 58 Euros, which we promptly used at a coffee bar to buy espressos.

While waiting for the plane to Palermo, we met Mike and Lisa from West Virginia, who are also part of the VBT biking group.

The plane to Palermo departed on time at 1:20 pm. We got to Palermo at about 3, collected our suitcases with no problem. We also met Kam in baggage claim, who is also on the tour and turned out to be one of the Syracuse group. We met our van driver in the lobby. From the airport, we went directly to the hotel, Ai Cavalieri. 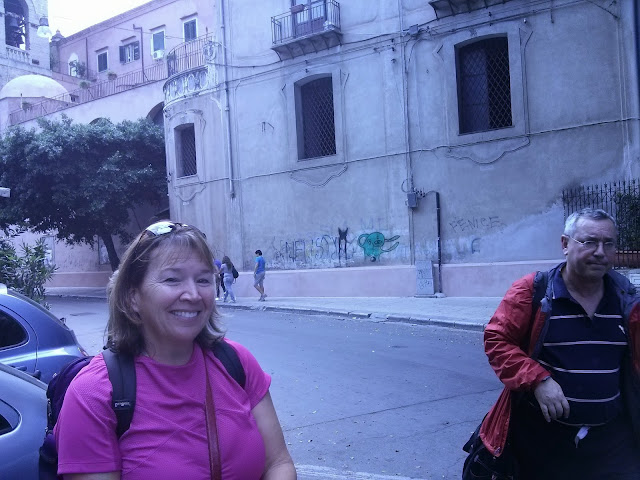 After checking in, we went out for a walk around town and saw some sights.


We got back to the hotel at 5 pm to meet with some of the rest of the group. We were a little early, so we got beers from the hotel bar.


We met a tour guide (Jodie? Maybe it was Josie?) and a bunch of women from Syracuse, NY, plus Mike (who we'd met in Rome). Jodie was going to take everyone for a walking tour, but she was going to the same area we'd just been to, so we skipped it. Instead, we tried to go to dinner. We were really just wanting to eat and go to bed, so we got a few recommendations from the front desk and headed out. It turns out nothing is open until 8 pm. Lots of walking, no food. Finally, we found a small pizza place that did take out, so we got a large Diavola (same as pepperoni) and a couple of bottles of Morreti (Italian beer) and took them back to the hotel. We ate and were in bed by 8 pm. We slept 11 hours, and it felt good!