We signed up for the post trip in Syracuse.

"Located near the southeastern corner of Sicily on the Ionian coast, overlooking a wonderful bay, Syracuse has forever depended upon the sea, rallying herself around the island of Ortygia. More than any other modern city in Sicily, Syracuse, UNESCO world heritage town, shows a visible continuity from its ancient past, both historical and mythological, to the recent time, a past which has left a number of vestiges for the modern-day visitor to see and enjoy. Art museums and popular traditions make Syracuse an interesting place to visit for vistors coming from all over the world."

We had breakfast at the hotel, which had one more nice honeymoon touch: 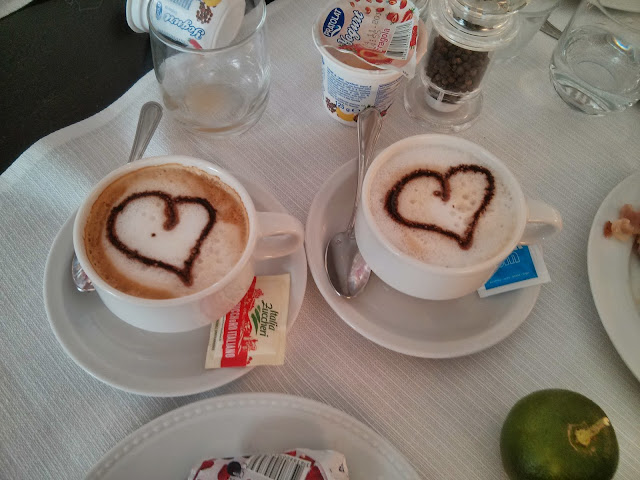 Lisa took a few interesting pictures while we were waiting for our ride to Syracuse. 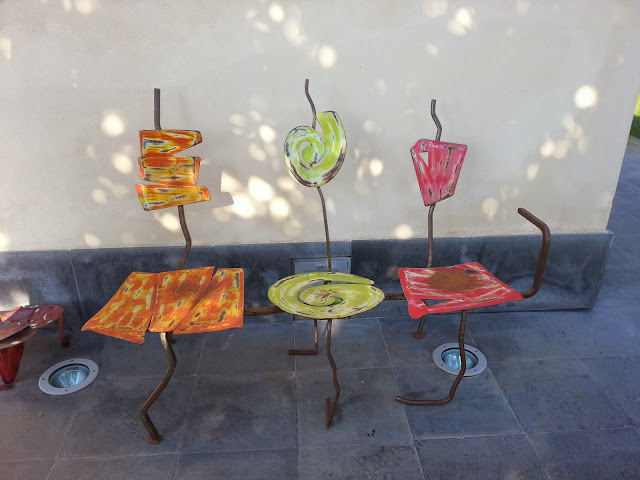 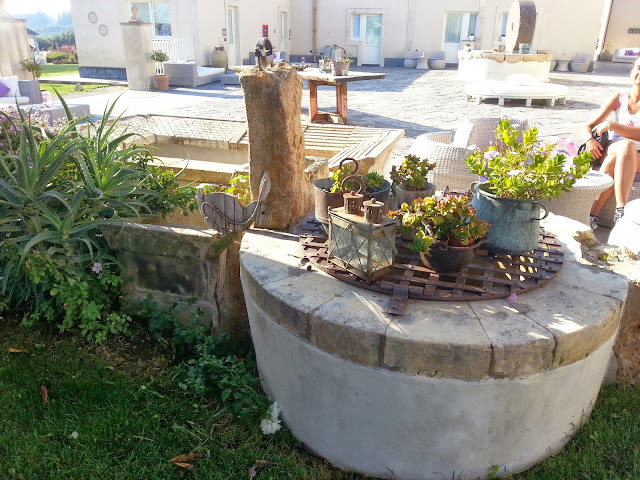 Then we got in taxis and headed to Hotel Livingston Relais Spa.


We were early and couldn't check in until later, but that was okay since we were joining with Pete and Joyce and several others in the group for a walking tour around Ortygia. Elisa met us at the hotel at 10 am, then we set off. Lots of pictures and lots of history. We pretty much did the walking tour as described in the VBT book, with Elisa pointing out the sights and adding a lot of history:

"Start strolling the Jewish quarter Guidecca (there is a quite unique mikvah in Syracuse under the hotel Residence Alla Guidecca, generally open to the visits all week except on weekends) the walk to Archimede's Square, surrounded by beautiful palaces dating from different times, among them the homonymous museum (Arkimedeion) named aftger the famous Greek genius died in 212 BC. You will across the Littorio Street (Corso Metteotti) to get to Piazza Pancali where you'll admire the ruins of the Apollo temple 6th century BC. Visit the amazing cathedral area on Piazza del Duomo, dominated by the majestic late-Baroque prospect of the Cathedral, by other fine Baroque buildings such as Archbishop's Palace to end with the St. Lucy Church (Chiesa di Santa Lucia alla Badia). Going through San Rocco square you will reach then the legendary Aretusa fountain, permanently populated by clumps of papyrus, ducks and drakes with its ancient myhological charm. Enjoy a wonderful view of Porto Grande (Big Harbor). The tours could end with the visit of the Castle. The Maniace Castle built by Frederick II of Swabia in the first half of the 13th century on the place where the Byzantine general, Giorgio Maniace, who in 1038 tried to rescue Ortygia from the Arabs, erected a fortress to fortify the island." 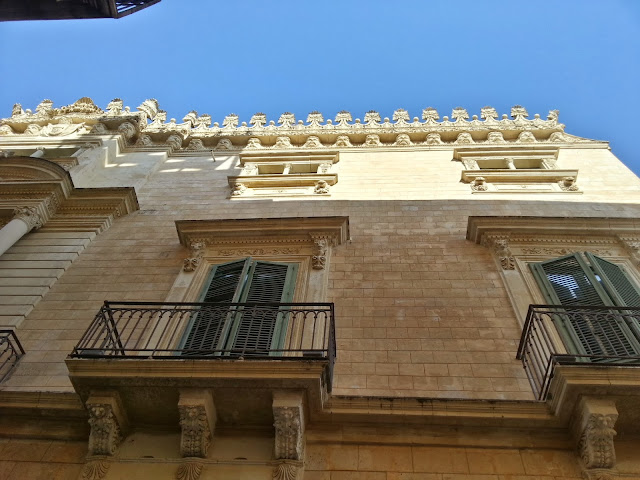 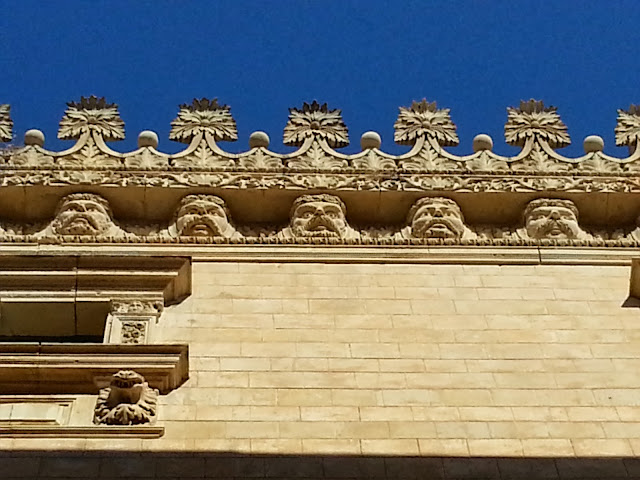 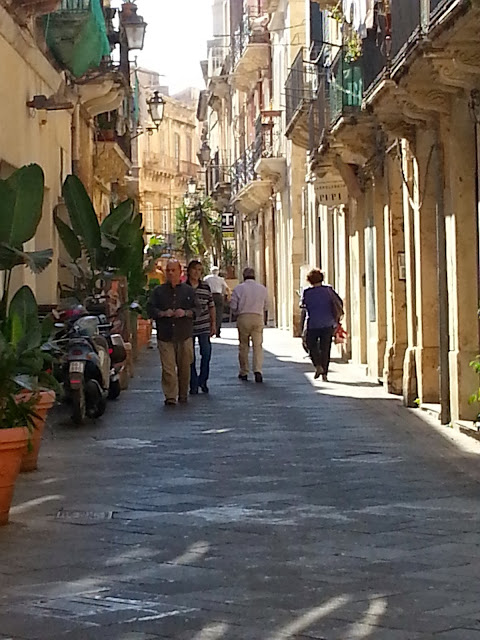 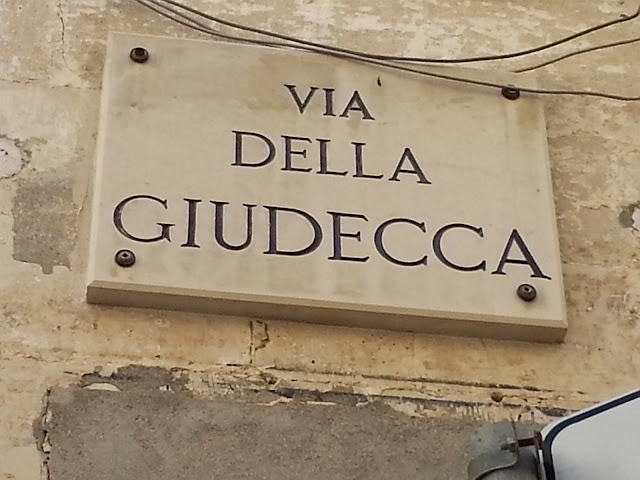 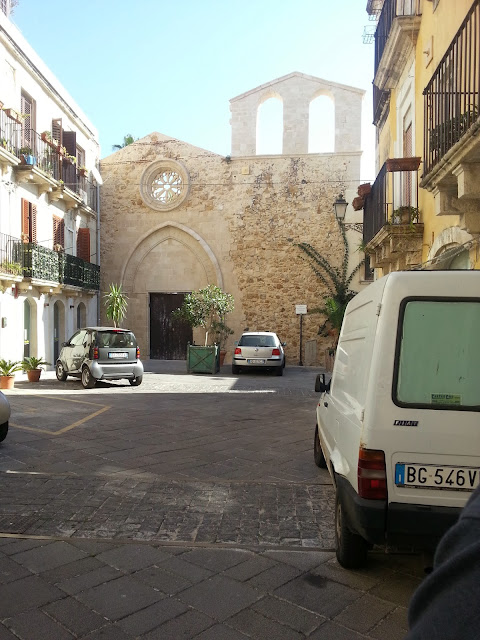 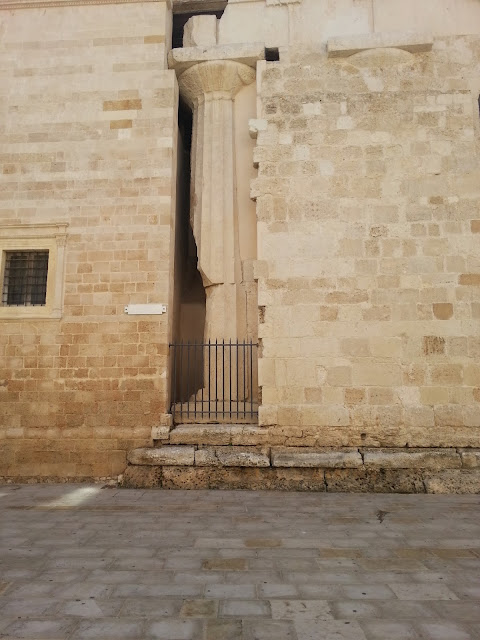 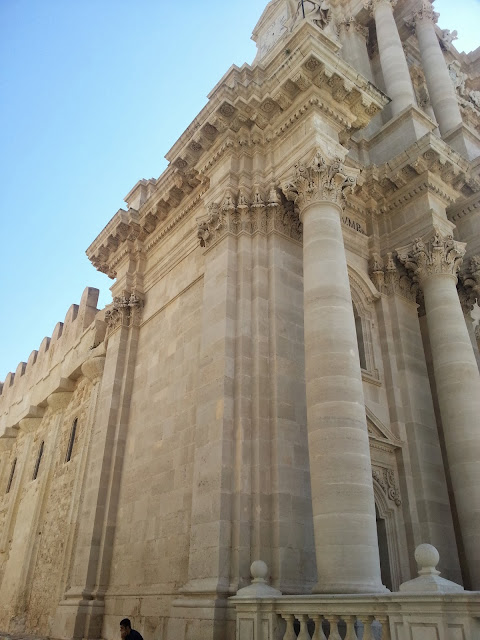 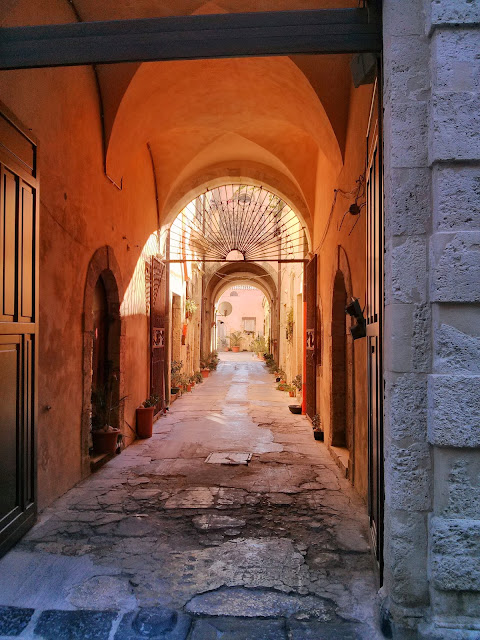 The walking tour took about 2 hours, then we stopped for an espresso to relax and plan. The plan turned out to be stopping at a candy store we'd seen earlier and have some chocolate covered candied orange peels.

We finally made it back to the hotel and got checked in. Really a nice room. 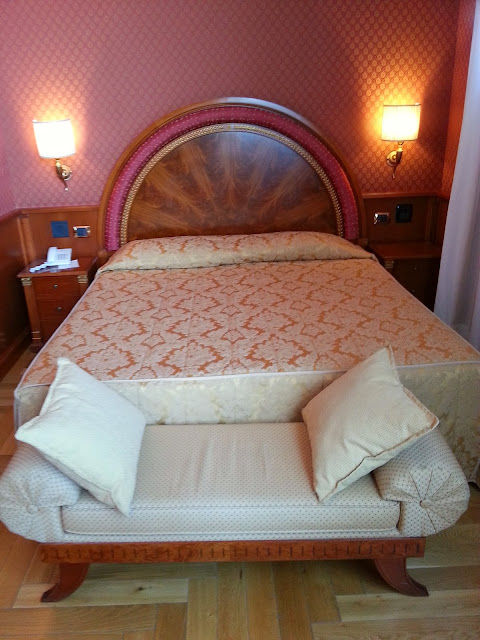 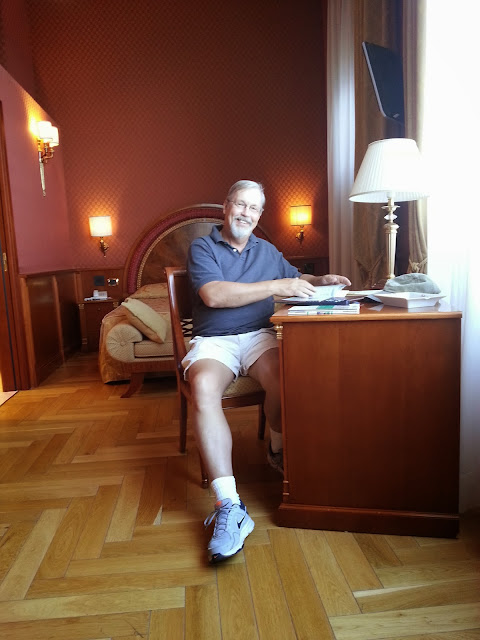 After a short nap, we headed back out. Mt Etna had erupted, so the sky was hazy and made for a nice sunset. 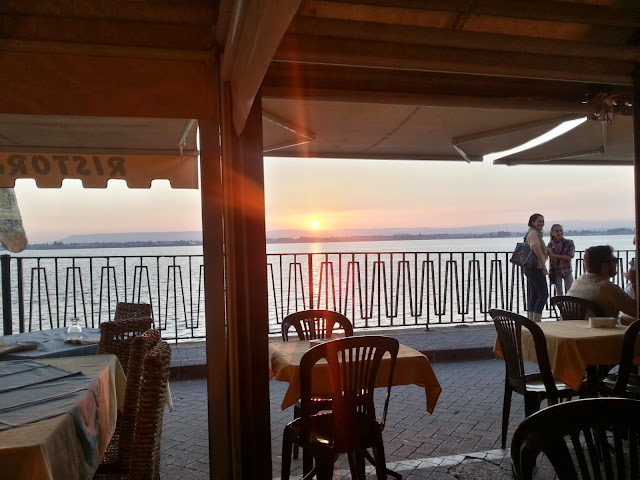 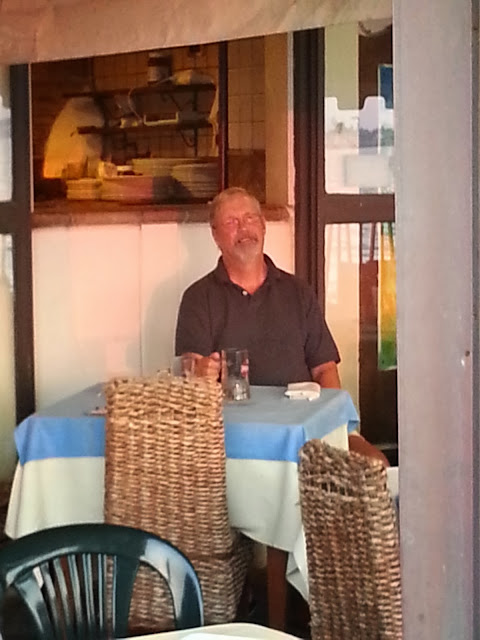 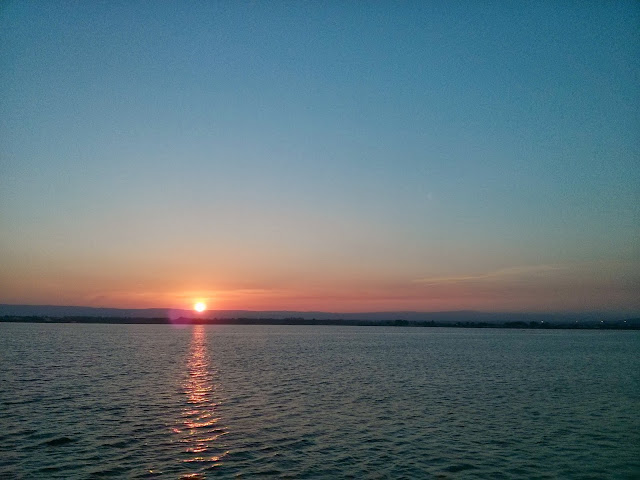 We stopped at a restaurant by the bay for dinner, quattro formaggio pizza and beer, then went to the concert Lisa had found the flyer for. It turned out we didn't have enough Euros to get in and they couldn't take a credit card. Luckily, we ran into some other people from our VBT group who exchanged dollars for Euros for us. Apparently we look old enough, we got in on the 5 euro old people price. The concert was by the Warhol Piano Quartet, and was pretty good. The piano and cello players in particular were very involved in the music. Hot and stuffy in the recital hall, I was glad I'd worn flipflops. They played Beethoven and Schumann, then did a couple of encores, one of which was the theme song from "the Good, the Bad, and the Ugly". Fun!

Afterward, we walked around a bit more, then stopped at the Clandestino bar near our hotel for a beer. They have a great selection, over 50 different beers from all over Europe. Lisa had a lager from Estonia, I had an Italian IPA. 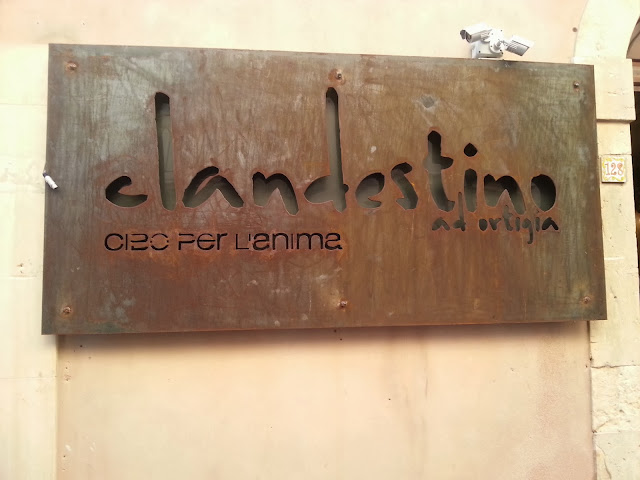