We met up with Barb and Cynda at breakfast, then met Francesco outside the hotel at 9 am for a trip to Taormina. The weather was perfect. Taormina is about an hour and a half drive north of Syracuse, and will be the pre-trip option for VBT trips next year:

"Taormina, with its incredible views ranging from its blue waters, the Etna volcano, the bay and rocks and the little isle of Isola Bella, as well as the concentration of monuments of different architectural styles in a handful, is the compendium of the beauties of Sicily. Don't miss the magnificent Greek Theater, the symbol of Taormina, an ancient Greco-Roman theater nestled in the mountains with spellbinding views of the sapphire-colored sea, Etna and the city. Stroll along the Corso Umberto with its classical music cafés, pastry shops and monuments left from the Arabs and Normans, gothic and baroque buildings."

There was some talk on the trip that skipping Palermo is a bad move by VBT, but after visiting Taormina, I don't think so. This was one of the highlights of our trip.


As we entered Taormina up a winding road, Francesco pulled over by a viewpoint so we could take some pictures. 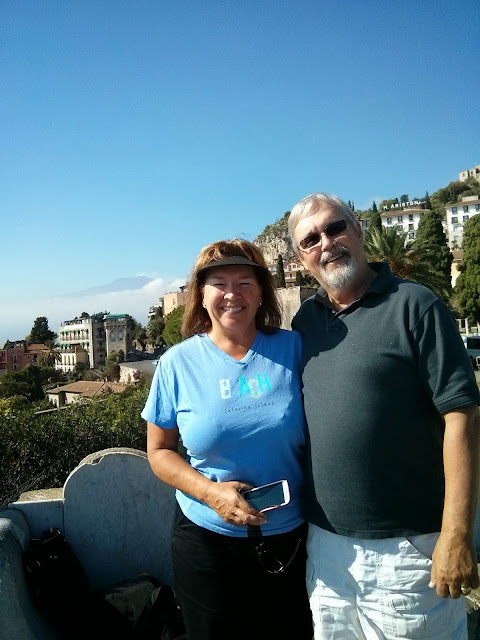 After parking, we walked into the main town area, headed for the Greek Theater first. We picked up a couple of souveniers on the way. 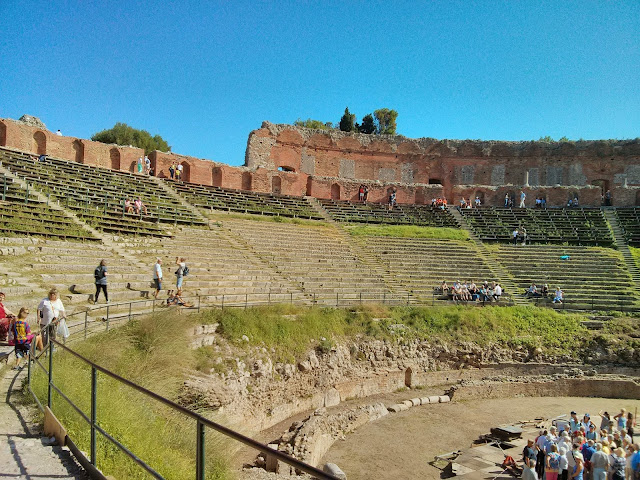 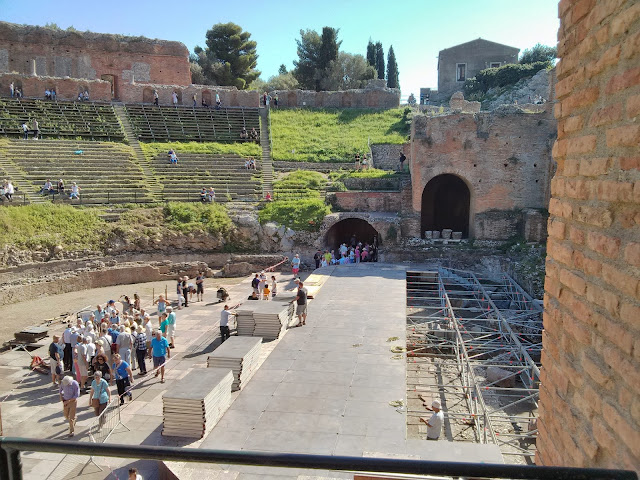 This theater is in great shape and is used all summer long for shows. The day we were there was after the show season and workmen were removing the stage for the winter. 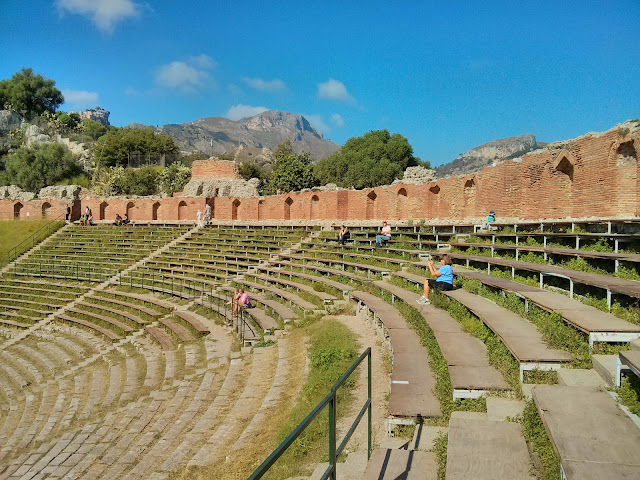 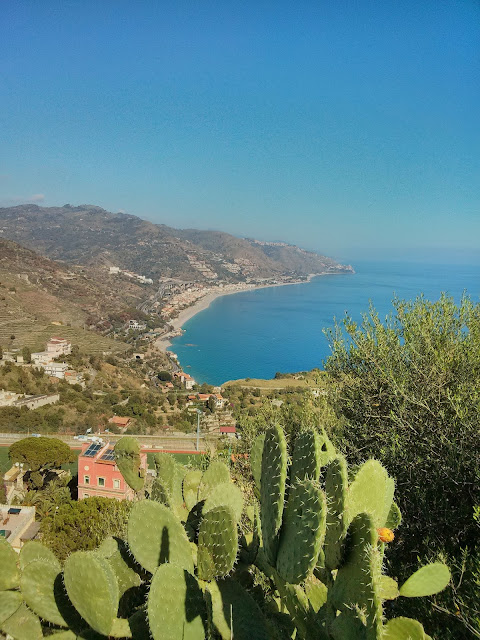 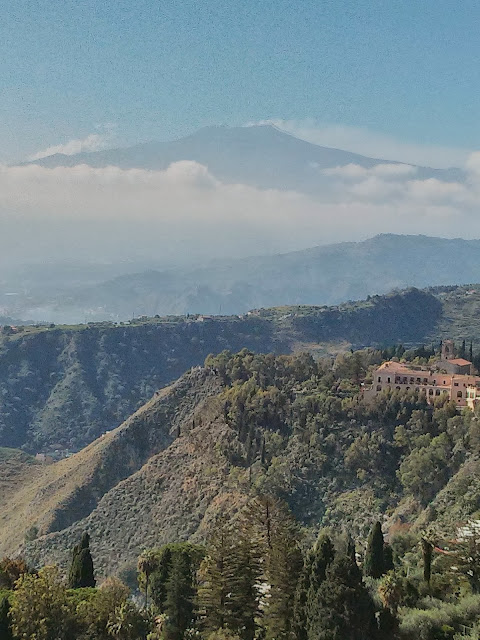 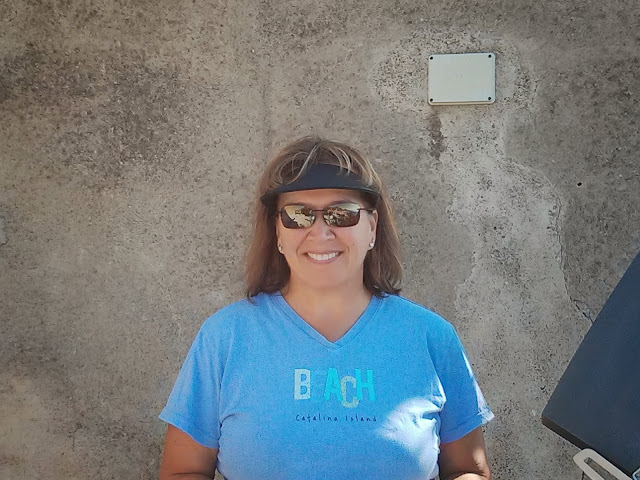 We had considered bringing along our tennis racquets on this trip, but decided not to. This is the first tennis court we'd seen the entire trip. 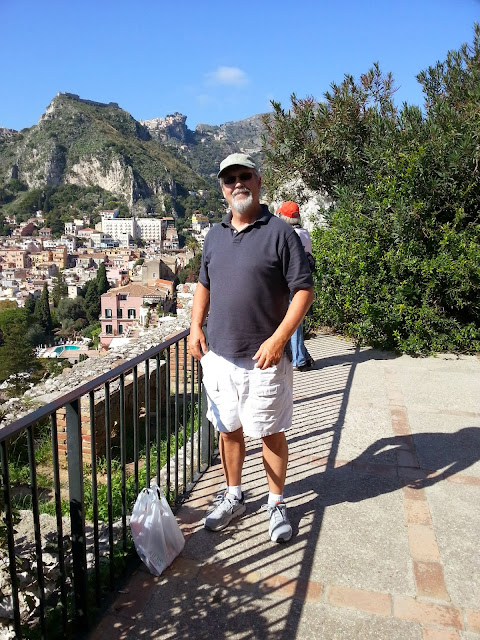 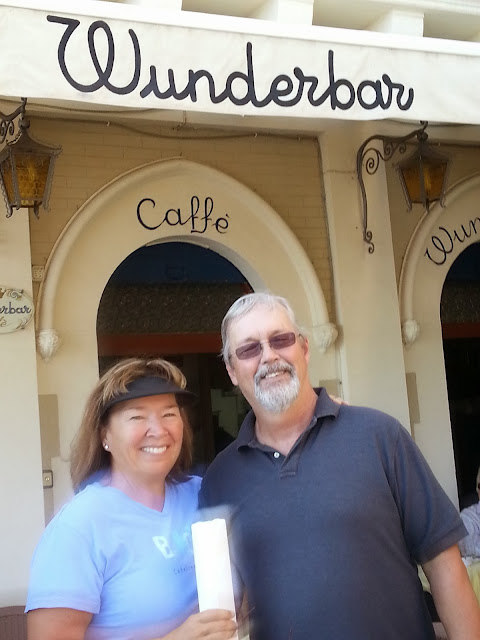 The Wunderbar is famous from back in the day, this was Winston Churchill's favorite bar, Elizabeth Taylor has a drink named after her (it has liquors and a special ingredient, we know because Lisa asked for the recipe). I had an Erdinger hefeweizen and Lisa had a Bitburger pils. The waiter made quite the production out of pouring the Erdinger, he had the right glass and a matching coaster and poured it like a German, "mit hefe" style, that is, pour out all but an inch or so, swirl and shake the bottle to get the yeast off of the bottom, then pour a perfect, cloudy head on the beer. There was no offer to fruit the beer. He got a good tip :)

Just down the street in the piazza in front of the Wunderbar, Lisa bought a nice watercolor from a street artist, Elias Nakouzy. He wanted 40 euros for it, but since we didn't haggle, he gave it to us for 30. Nice guy!

We grabbed a pocket pizza sort of sandwich to eat on the way back. We met up with Francesco and were back at the hotel at about 4.

After we got back, we walked over to Clandestino's again for a couple of beers. They had Erdingers, so we each had 2. Not nearly the production as in Taormina, but the beer was just as good. We talked with an Australian couple who were also there on vacation.

We have an early wake up in the morning, 3 am (ugh!), so to finish out the evening, we went to a local pizza place for dinner and wine. Nice place, forget the name, but the sort of place locals go and not so much a tourist place. Really good pizza.

And that's about it. We got up real early and met the taxi outside of the hotel at 3:45 am, drove to Cantania airport, then started the long trip home. We got back home at about 1 am Halloween morning, which amounts to about 28 hours total travel time. Good fun, and we'd do it again.